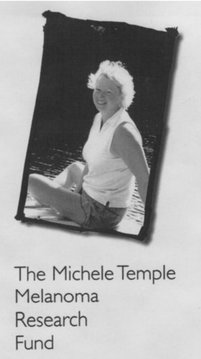 ​In 2008, Ron established the Michele Temple Melanoma Research Fund at the Princess Margaret Cancer Foundation in the honour of his late wife Michele.  Michele passed away in April 2008 from malignant melanoma originating from a mole on her ankle.  The funds raised are directed to research in order to find a cure for the dreadful disease.

Ron also established the Michele Temple Memorial Scholarships at Newton's Grove School given to the deserving, junior, middle and senior students.  The school also holds the annual Michele Temple memorial "walk" to raise money for the fund as well as donations to many health related charities.  Ron's other favourite is the Hospital For Sick Children, where he began his dental career.